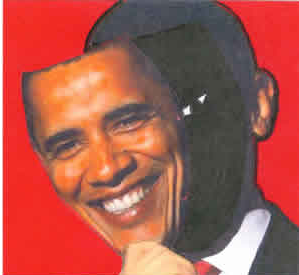 My fellow Americans, we are all bit players in the making of a metaphoric slasher movie, “Obama Unchained” starring Barack Hussein Obama.

Here is a summary of the movie. It is a heartwarming tale about how the mainstream media and Democratic Party suckered America into electing their extreme far-left dream president; a Trojan Horse in the form of a black man.

Once in the Oval Office, Obama began incrementally implementing his socialist/progressive agenda and iron-fist pressure on Americans to conform. Everyone, including a 175 year old order of elderly Catholic nuns were forced to comply to Obama’s decreed anti-biblical new moral standards or face termination. Only donors, labor unions and favored friends of his royal Obamaness totaling over 2000 are unlawfully granted exemptions from his tyrannical overreaches hidden in Obamacare.

Unchained from pretending to be a moderate to get reelected, Obama is releasing his judgment and rage upon America; wielding his executive pen sword, causing a bloody massacre of our economy, national security, world standing, freedoms, liberty and culture.

Now totally unrestrained, with lawless abandonment, Obama dishes out what he believes is well-deserved revenge on America for her crimes against the rest of the world. Obama is delivering the retribution spoken of by his former pastor, Rev. Jeremiah Wright who said, “America’s chickens have come home to roost.”

Pundits say Obama is merely incompetent. They site highly unfavorable approval polling to conclude that Obama’s presidency is in deep trouble. Political analysts believe dismal poll numbers will force Obama to back away from his intensely focused savage attack on America as founded; his vowed fundamental transformation of America. These sycophant, apologist or naive talking heads are missing the point. Obama does not give a rat’s you know what about polling. Nor does he fear lawsuits, Congress, impeachment or anything else.

Remember Michael Jackson’s famous line, “I’m not like other guys”? Obama believes he is not like other presidents. I am Barack Obama, the first black president. I can do whatever I please and no one is going to stop me. Period!

“Obama Unchained”, the movie, is directed by Unknown Socialists/Progressives.

Obama’s supporting cast includes Eric (cited in criminal and civil contempt of Congress) Holder as the corrupt partisan head of the DOJ. Lois (Wicked Witch of America) Lerner as the corrupt, vindictive and evil IRS enforcer. Kathleen (Yes, you will fund abortions against your faith) Sebelius as the totally incompetent head of the botched Obamacare roll-out. Jay (please don’t make me go out there and lie again with a straight face) Carney as Obama’s Press Secretary. This just in, Carney has been replaced by understudy liar, Josh Ernest.

If the metaphoric Socialists/Progressive’s movie were to snag a Best Song nomination, their song would be titled, “I Believe I Can Lie” performed by Barack Obama. A real trailblazer, Obama is the first U.S. President awarded, “Liar of the Year”.

In my metaphoric scenario, the buzz in DC would declare “Obama Unchained” a shoe in for Best Picture. However, the sentimental payback favorite for Best Picture would be “Sixty-Six Years A Liberal” starring Hilary (don’t asked me about Benghazi) Clinton.

Folks, while I have taken a humorous approach to describing Obama’s Revenge War on America, the situation is extremely serious. The solution is quite simple. It is push back, push back, push back politically. While the Tea Party remains fully engaged, what strong courageous conservative will emerge to lead the charge?

We who love America are metaphorically in the process of producing our own movie titled, “November 4, 2014: Independence Day.”

Self proclaimed Black Unhyphenated American, Lloyd Marcus is a featured columnist on American Thinker, Renew America, Canadian Free Press and numerous other Internet websites. A speaker, activist, singer/songwriter, recording artist and entertainer, Marcus was a featured act on the historical 2009 Tea Party Expressed Tour. The finale event was the Sept. 12th Taxpayers March and Rally in Washington DC where Marcus performed for a million people.

His appearances include FoxNews, CNN, PJTV and numerous TV and radio programs. He emcees and performs his patriotic original songs at rallies and special events across America. He was the featured entertainment at the 2009 Free Republic National Convention. Marcus’ mission is to use his God given gifts to spread the “truth” that Conservatism is best for all Americans. He resides in Central Florida.

An elected official, Marcus is Chairman for Precinct 424, Volusia County Florida. He is also Creative Director for the Republican Executive Committee of Volusia County.

This entry was posted on Friday, July 11th, 2014 at 7:20 AM and is filed under World Politics. You can follow any responses to this entry through the RSS 2.0 feed. Both comments and pings are currently closed.