SDRs AND THE NEW BRETTON WOODS PART ONE

In my previous post I briefly explained how China was in the process of assuming the liabilities of the Federal Reserve, in addition to their already held liabilities of the U.S. Treasury.  Such a strong statement will require even stronger evidence.  This I will attempt to achieve over this multi-part essay.

“The legislative process is underway right now. We want the reforms to be adopted expeditiously. It’s really the U.S. Treasury, Jack Lew and his team that’s taking the lead on getting these measures through the U.S. Congress that are required to implement the 2010 reforms.”

“Just to remind you what those are, the 2010 reforms do a couple things. One, they bring four dynamic emerging market countries into the top 10 shareholder ranks or what we call quota ranks of the institution. China, Brazil, Russia, India. It also doubles our permanent capital, the quota. And it also creates a fully elected Executive Board.”

“The IMF is explicit in its antidemocratic leanings, what it calls “political considerations”.  The SDR blueprint calls for the appointment of “an advisory board of eminent experts” to provide direction on the amount of money printing in the new SDR system.  Perhaps these “eminent experts” would be selected from among the same economists and central bankers who led the international monetary system to the brink of destruction in 2008.”

G. Edward Griffin’s mind altering “The Creature from Jekyll Island” introduced many of us to the somewhat hidden history of the U.S. Federal Reserve.  It told of how the Federal Reserve Act was passed in Congress during the Christmas break in the year 1913.  It was insidious.  And it changed the course of human history, as it planted the seed of what would slowly grow to become the world’s reserve currency.

Though the U.S. dollar didn’t become the official reserve currency until the Bretton Woods Agreement of 1944, it is commonly accepted that the dollar had already usurped the British pound of this title well before it was officially acknowledged. As I believe the U.S. dollar has now already been usurped by another.  We’ll get back to that in a while.

There was another event which took place in the year 1913 which has been little understood or known at all in the western world today.  After the collapse of the Manchu Dynasty in 1911, the remaining Government of the Chinese Republic issued bonds to foreign investors for the purpose of raising capital to rebuild the country.  These bonds were titled the 1913 Chinese Government 5% Reorganization Gold Loan.  Emphasis on the word gold for later reference.

These bonds were pegged to the price of gold as a hedge against future inflation and were denominated in four currencies.  The underwriting banks for the bonds reflect the four currencies which the bonds were interchangeable with at the time, which are now known as HSBC, Deutsche Bank, the Bank of Tokyo-Mitsubishi UFJ, and Caylon – Credit Agricole Corporate and Investment Bank.

Keep in mind that these bonds were issued in the same context as the U.S. Treasury Bonds which the world’s central banks have been gobbling up since 1944. These bonds had a yield.  These bonds have never fully been acknowledged by the Chinese government.  As a part of the deal with the British government for the return of Hong Kong, the People’s Republic of China did honor 10% of the outstanding bonds at about 62% of the face value.  And what I can say at this time is that there is in fact a deal in the works for a final payout on the remaining bonds.  We’ll get back to that in a while. 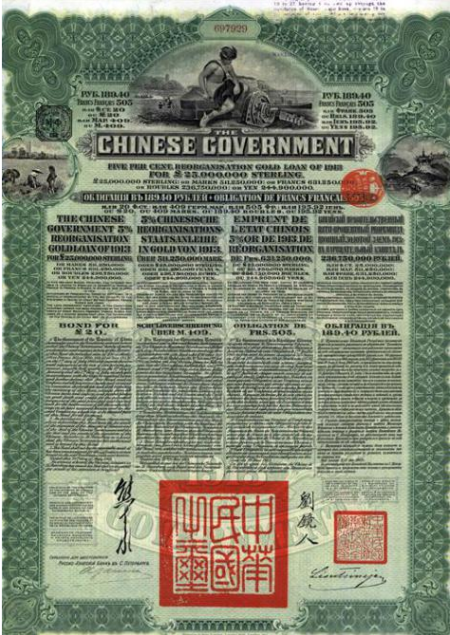 In 1944, as a part of the Bretton Woods system, the International Monetary Fund and the World Bank were created.  These were western dominated institutions whose sole purpose was organizing foreign markets for the acceptance of U.S. dollars.  We will leave the full explanation of these institutions and their role in structuring our current debt based system for another essay series, but for our purposes here, it’s important to understand that they propagated the exporting of dollar inflation to what we now call the “emerging markets”, or the BRICS countries.

Since the initial printing of the Federal Reserve Note (U.S. dollar) in 1913, the “dollar” has lost 95% of its value.  We see this devaluation of the dollar as inflation, or the increase of costs for items we buy.  This devaluation of the dollar has had a few milestones.  One is after the Bretton Woods Agreement when the dollar became the primary reserve currency of the world.  The second came when President Richard Nixon uncoupled the dollar from its peg with gold.  This was in 1971.  A third milestone can be argued to be in 1973, when the so called “petrodollar” was created with agreements between the U.S. and Saudi Arabia, and later all the OPEC countries.  This “petrodollar” scheme ensured that all oil trades were completed internationally in U.S. dollars.  This was a slight-of-hand from the Bretton Woods arrangement to the “petrodollar” arrangement.

A fourth milestone was obviously the onset of Quantitative Easing after the financial crisis of 2008.  The chart below clearly shows how with each milestone the amount of debt (money printing) by the U.S. Treasury and Federal Reserve tag team has been multiplied dramatically leading to inflation.  This is shown by an increase in the red line, which represents CPI – Consumer Price Index, the amount you pay for stuff.

The only end to this pattern is an end to the dollar as the world’s primary reserve currency.  Just like the British pound before it.  In the chart below you’ll notice the same gradual downward pattern as the U.S. dollar.

The central banks of the world were buying up U.S. treasuries before the British even accepted that there was a problem with the pound.  The same is happening today with the dollar.  In fact, most of the world outside the United States has already accepted the demise of the dollar as fact.  But the idea is unfathomable to the average American.

The International Monetary Fund issues a currency called SDR – Special Drawing Rights.  The SDR’s are valued on a basket of currencies.  In essence, it’s a true to life multiply reserve currency system.  It has been slowly built up since the early 1970’s, at the same time the U.S. dollar started its serious devaluation.  Could the plan have been in place since 1971 to end the dollar system through hyperinflation before implementing the SDR as a true world currency?  Perhaps.

On January 9, 2014, I.M.F. Deputy Spokesman William Murray was giving a press briefing.  With zero coverage of this briefing in the western media, it’s important to relay what happened when the questioned was asked about the implementation of the 2010 Code of Reforms, or Governance Reforms.  Mr. Murray answered by stating:

“The legislative process is underway right now. We want the reforms to be adopted expeditiously. It’s really the U.S. Treasury, Jack Lew and his team that’s taking the lead on getting these measures through the U.S. Congress that are required to implement the 2010 reforms.”

It seems both the U.S. Treasury and the I.M.F. are very anxious about these reforms.  So what are they?

“Just to remind you what those are, the 2010 reforms do a couple things. One, they bring four dynamic emerging market countries into the top 10 shareholder ranks or what we call quota ranks of the institution. China, Brazil, Russia, India. It also doubles our permanent capital, the quota. And it also creates a fully elected Executive Board.”

This tells us a few important things.  One, the influence of the BRICS countries within the structure of the I.M.F. is going to be greatly expanded.  As stated, they will be in the top 10 shareholder ranks.  These are positions previously dominated by western financial and U.S. dollar interests.  The gravity of this statement cannot be understated.

Second, it’s telling us that the BRICS countries are bringing capital with them.  Enough capital in fact, to double what the I.M.F. presently holds on reserve.  The BRICS countries will be injecting a huge amount of capital into the SDR system.  One only has to research the amount of gold being exported to the BRICS countries, especially China, to understand where this capital, or worth, will come from.  We’ll get back to that in a while.

Thirdly, expanding the influence of the BRICS countries within the structure of the I.M.F. also “creates a fully elected Executive Board”.  The Executive Board of the I.M.F. is responsible for SDR allocation.  Let that sink in for a moment.  The BRICS countries are going to have an equal say on SDR allocation.  The SDR is being built up as the world’s reserve currency.  The value of the SDR will be based on a basket of currencies.  And the U.S. Treasury is pushing congress to make this happen.

On August 5, 2013, the Peoples Bank of China called for a “New Bretton Woods” system where the U.S. dollar would be removed as the world’s primary reserve currency.  It also called for an expanded usage of the SDR and for the new system to be supported by gold.

In Part Two, we will explore how the U.S. debt, being the liabilities of both the Treasury and the Federal Reserve, will be consolidated with the treasury bonds held by China and rolled into the new SDR system.        – JC Collins

China to Purchase the Federal Reserve

This entry was posted on Saturday, January 25th, 2014 at 12:38 PM and is filed under World Politics. You can follow any responses to this entry through the RSS 2.0 feed. Both comments and pings are currently closed.